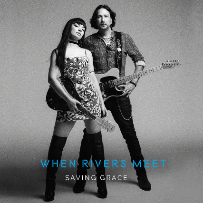 Edinburgh Blues Club
When Rivers Meet
with When Rivers Meet, Troy Redfern
The Liquid Room , 9C Victoria Street, Edinburgh
Since bursting on to the UK Blues scene with their debut record ‘The Uprising EP’ in April 2019 followed by their second EP ‘Innocence Of Youth’ in May 2020, Grace and Aaron have been going from strength to strength. The Briti... Read more

Since bursting on to the UK Blues scene with their debut record ‘The Uprising EP’ in April 2019 followed by their second EP ‘Innocence Of Youth’ in May 2020, Grace and Aaron have been going from strength to strength. The British husband and wife duo have an ever-growing online fan base and have gained the attention of Cerys Matthews’ The Blues Show on BBC Radio 2.

In November 2020, they released their debut album ‘We Fly Free’, to critical acclaim from the UK radio and rock music magazine media.

In October, WRM’s first single from the album, ‘Battleground’, was added to the main playlist on the UK’s leading classic rock radio station Planet Rock.

In late November, the band followed up with a second single, ‘Did I Break The Law’, that was played on BBC Radio 2’s The Rock Show with Johnnie Walker. The single was also played on Planet Rock throughout December 2020 and into January 2021.

The UK rock music press were unanimous by praising ‘We Fly Free’ as one of the most striking, refreshing, and impressive debut blues rock albums of 2020.

Vive Le Rock said that ‘We Fly Free’ was “urban blues with the brakes off,” and gave the album with a 9/10 rating, while Guitarist Magazine described at album as “electrifying, it’s a great debut.” Fireworks Magazine praised it as “One of the best blues rock albums of the year.”

On October 26th, ‘Battleground’ won “Tracks of the Week” on Classic Rock’s Louder Sound website, who described it as “Primal old-school blues (more John Lee Hooker than Stevie Ray Vaughan) – dressed up in biker leathers and wreathed in arthouse smoke.”

Support is provided by Troy Redfern 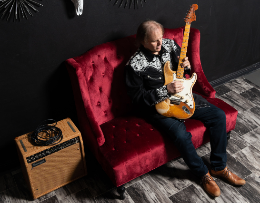 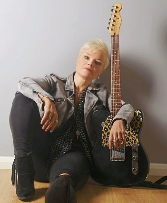 Edinburgh Blues Club
Rebecca Downes Band
with Rebecca Downes, Reese Hillis Trio
The Voodoo Rooms , 19a W Register St, Edinburgh
Birmingham-based Rebecca is a fully independent artist creating original blues/rock music with her co-songwriter Steve Birkett and releasing it on her own label Mad Hat Records, part of her own company that manages all aspects of the production chain... Read more

Birmingham-based Rebecca is a fully independent artist creating original blues/rock music with her co-songwriter Steve Birkett and releasing it on her own label Mad Hat Records, part of her own company that manages all aspects of the production chain from creation through manufacture to marketing, promotion and sales.  Worldwide physical and digital distribution is undertaken by Cargo Records.

She usually plays live within a 5-piece band, performing tracks mainly from her superb second album Believe and the stunning third album More Sinner Than Saint, along with new material and one or two classic covers.  Rebecca was voted Female Vocalist and Emerging Artist of the Year at the British Blues Awards 2016 and Female Blues Vocalist of the Year in the FORM UK Blues Awards 2018.  In July 2020 Rebecca was appointed Brand Ambassador for the Forge Ahead Initiative supporting the development of young bands.

She was born and raised in Wolverhampton in the West Midlands of the United Kingdom.  She grew up listening to a variety of different music with early influence from artists that her parents listened to such as Ella Fitzgerald and Etta James.  She first started performing live music when aged 13 and as a teenager wrote and performed her own material.  Some original recordings still exist – a little rough round the edges at times, but the passion and energy comes through, along with the power of her voice.  In her teenage years she was very much into rock but over the years she has listened to, performed and enjoyed a very wide range of music.

IN LESS THAN 18 MONTHS THEIR OWN BRAND OF MODERN, 'DANCEFLOOR GOSPEL-BLUES' HAS CATAPULTED THEM FROM NEAR-COMPLETE OBSCURITY TO RAVE REVIEWS AND BIG-STAGE APPEARANCES ACROSS THE WORLD. FOLLOWING THE RELEASE OF THEIR 2019 ALBUM 'THE LOST ARC' THEY RECEIVED RADIO AIRPLAY BY CERYS MATTHEW (BBC 2 BLUES SHOW) AND REACHED #1 IN THE INDEPENDENT BLUES BROADCASTERS AIRPLAY CHART AND WERE NOMINATED FOR THREE UK BLUES AWARDS.

IN SEPTEMBER 2019 THE BAND WON ONE OF THE MOST PRESTIGIOUS ACCOLADES IN BRITISH BLUES MUSIC WHEN THEY WERE SELECTED TO REPRESENT THE UK AT THE INTERNATIONAL AND EUROPEAN BLUES CHALLENGES IN 2020.

THE ACHIEVERS DRAW ON THEIR OBSESSION WITH AMERICAN VINTAGE DANCING MUSIC AND THE SONGWRITING PIONEERS OF EARLY RHYTHM & BLUES, AMERICANA AND SOUTHERN SOUL - AND WITH THEIR INFECTIOUS RHYTHMS, JOYFUL MELODIES AND FOUR-PART HARMONIES THEY STAND PROUDLY AS BRITISH BLUES & ROOTS OUTLIERS.
£18 Buy Tickets 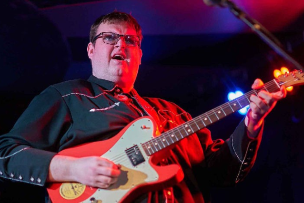 His progress since forming Glas in early 2012 has been steady with nearly 2000 gigs since, playing every gig in the Valleys before expanding horizons beyond. See him on stage, though, and spectacular is very much the word. Little wonder the late, great Deke Leonard of Man/Iceberg fame was moved to say that ‘Speaking as a guitarist, James Oliver scares the hell out of me.’

As music business veterans will tell you, success is 10 per cent inspiration and 90 per cent perspiration. As he enters the next stage of his career, James Oliver has a track record that shows he will not allow an ounce of his talents to be wasted. And with new musicians to interact with, chances are the music in store will exhibit hitherto unheard dimensions to delight his growing army of fans. With his new album of original material TWANG set for release in 2020. James plays
Blues, rock a billy, rock and country…it’s all here in one explosive pickin package’
£18 Buy Tickets 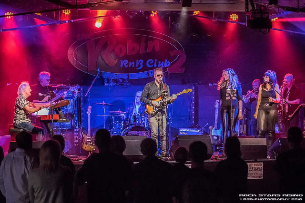 Chris Bevington Organisation is full of style, swagger, replete with tones and textures of the blues and that added extra the joy and harmonization as the musicians gather around the microphones and jam. They are playing with a natural feel and layering the sounds to bring the listener a bucket full of pleasure.  Opening with It’s Too Late, a bright n’ breezy beat filled number we get to know the band with delicious licks from Jim Kirkpatrick’s guitar, bursts of Scott’s baritone horn and his vocals that curl around the music picking up the juicy sound and delivering the lyrics. I know it is too late, the speakers are going to be playing this music for a while. The child of the blues, Rock n’ Roll is ever present and this is given full voice as we hear Got To Know.  This track demonstrates the power of backing vocals as Kate & Sarah join the fun. This is a number that will get the party going, gig or festival goers would just have to get up and dance as the beat energizes the listener.

The blues is captured, old-style vibe with the beat of a holler and the gentle refrain from tambourine and humming adds a texture that conjures sun, heat and cotton and a swig of whiskey. Once again, the Organisation has developed the blues; this is crisp modern and a song you will never want to cut and run from as the rhythms build and the intensity hots up; leaving you excited and wanting to hear the rest of the album the perfect combination for a title track as it curls around the delta and up into the Mississippi Hill Country. Followed by It Ain’t Easy the beat changes we are hitting the swampy heat of New Orleans with horns and the pure unadulterated joy of musicians getting together and playing as the song says this vibe It Ain’t Easy, they achieve it with every note they play the saxophone and horns are the icing on the cake. The track ends appropriately with a laugh of unadulterated joy.

Like all albums and shows ,we have to find our way home. Coming Down with The Blues the penultimate track is no doctor’s prescription. It is music’s answer about how to be uplifted whilst coming down with the blues because your baby’s locked the door.  This is blues of smoky nightclubs, as the vocals, lyrics, guitar and horns meld into a melody of untainted delight. The energy is high and the audience will be clapping with joy and dancing with blues pleasure.

We celebrate with Chris Bevington Organisation music that makes you, smile, and dance and have a good time.